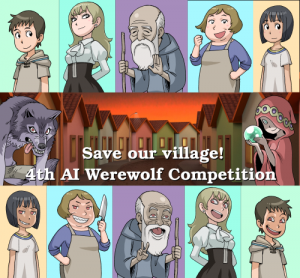 Can computers play Social Deduction games, such as “Werewolf” and “Among Us”, where the challenge is not so much in strategy or tactics, but rather in being able to manipulate other players through negotiation and deception?

To answer this question, we hold the AI Werewolf contest (AIWolf), where participants are invited to submit computer programs that can play the game of Werewolf (aka Mafia) against each other.

In 2022 the 4th edition of the International AI Werewolf contest will be held at the IEEE Conference on Games , from 21 to 24 of August in Beijing (online). Visit this page often to learn the rules and news about the contest.

A participant must submit a computer program that can communicate with the “AIWolf Server” software, and play the werewolf game against other agents.

This year, the competition is composed of three tracks (divisions):

Any submission must include the source code, build instructions, and a document describing the submission. Submissions from previous years are available, as well as example code. See more details in the sections below.

Participants are also encouraged to submit academic papers describing their AIWolf results to the “Competition Track” of CoG. The deadline is May 14th.

For more information, see the sections below for each track, or join the AIWolf Competition Slack to contact us directly!

In the protocol division, the agents communicate with each other through a fixed protocol, which facilitate the exchange of information. The goal in this division is to create agents that can effectively play the game and achieve a high win ratio.

To assist with agent development, participants can submit early versions of their agents to the contest server. Agents registered in the contest server will play test games several times per day, and the participants can access the logs of these games to debug and improve their agents. After the registration deadline, agents that crash during the contest will be disqualified, so make sure to test your agent before the deadline!

In the Natural Language Division, the agents communicate using natural language (English or Japanese). The goal in this division is to create agents that can play together with human players, and are enjoyable to play with.

Participants in this track have to submit in two runs. In the preliminary run, participants must submit the logs of 50 self-played games of their agent (5-player game). The organizer will examine the logs, and invite the participants for the formal run.

In the formal run, invited participants play against each other in 5-player games. The logs of this run will be evaluated by human judges, who will score the agents based on the quality of dialogue produced by each agent.

IEEE CIS is offering a 500 USD prize for the first place of the AIWolf NLP Division!

The AIWolf project celebrates open source software. In that sense, the infrastructure division recognizes contributions to the project through the creation of tools such as: visualizers, parsers, sample agents, server software, and others.

Tools submited to the infrastructure division will be evaluated by the participants and organizers of the competition, and a vote will choose the best contribution of this year.